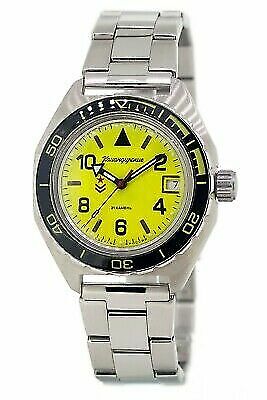 Finding a heavy-duty watch that is durable and stands the test of time can be a difficult feat. Vostok watches were designed with the military in mind, and they are a widely known option for a durable Soviet-made watch.

What is the history of Vostok watches?

Vostok Watch Makers is a Russian watchmaker based in Chistopol, Tatarstan, Russia. Vostok was founded in Chistopol in 1942 and was appointed an official supplier of watches for the Ministry of Defense of the Soviet Union in 1965. Many of the watches were for military use and marked with "ЗАКАЗ МО СССР" as proof. Vostok watches are known as a staple in military-grade watches.

What movements do Vostok watches include?

Vostok watches utilize their own mechanical movements and are based on the standard system of the Soviet era. There are over 15 different movement codes for Vostok watches. Some of the more commonly used codes are 2416B, 2426, and 2432. 2416B has a diameter of 24 millimeters and a height of 6.3 millimeters. It is an automatic movement with 31 jewels, 19800 BPH, a central second hand, and a date indicator. Movement 2416B can be found in Vostok Komandirskie, Amphibian, Kremlyovskie, Prestige, Breeze, Titanium, 2416B, and VIP.

What styles are Vostok watches available in?

Vostok watches are available in a variety of different styles throughout its many different collections, so you should be able to find a watch suitable for your needs. Vostok has over five different new collections available along with their running classics including the Amfibia, also known as Amphibian, line of watches. Most Vostok watches are made of steel and are silver in color though there are options for different color faces on the watches. Many of the watches also have linked bracelets as opposed to bands. However, bands are accessible options if you prefer a band over a bracelet.

Content provided for informational purposes only. eBay is not affiliated with or endorsed by Vostok, Slava, or Seiko.