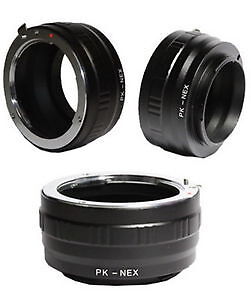 PENTAX is known as a pioneer of single-lens reflex (SLR) cameras. When youre using these cameras, switching lenses can provide different effects, which means you can dust off your favorite vintage lenses to create cool retro photos on a modern camera using a lens adapter. One to consider from PENTAX is the 50mm FL4, which will render a flat image and has a fast aperture.

What is the PENTAX K mount adapter?

The K mount is sometimes referred to as the PK mount. The K mount is a bayonet lens mount used for 35mm SLR cameras. The K mount was introduced with the K series camera and is a simple mount with three tabs. The K mount lens is locked onto the camera with a 70-degree clockwise turn.

What does the PENTAX K mount adapter do?

Introduced in 1975, the PENTAX K mount adapter allows you to use a K mount lens on another camera body. Camera bodies that work well with the K mount adapter are Canon EOS, Micro 4/3, Sony E-Mount (NEX), Sony Alpha, and Nikon F. By using an adapter, the link between the lens and camera is mechanical and involves the aperture. The stop-down coupler senses the aperture setting on the lens and adjusts the light meter display. K mount lenses can be used on all PENTAX bodies with help from an adapter, but are restricted to stopped down mode when in use with "crippled" bodies.

What adapters work with a K mount?What else is there to know about these devices?

You may need to focus and set other functions manually when using these. Sometimes, adapters include a dandelion chip that will alert you with either a beep or a light that comes on when the subject is in focus. Chips are generally only available in newer models.

Mirrorless camera systems are able to accept a wider range of lenses for use. Having a shorter registration distance means you can mount any lens designed for a camera with a longer flange focal distance (FFD) on a camera with a shorter FFD simply by using a lens adapter.

What other lens options are available from PENTAX?

The PENTAX 35mm f/2.4 will give an approximate 50mm field of view. This is recommended for street photography. The PENTAX DA 40mm f/2.8 is a portable option.

Content provided for informational purposes only. eBay is not affiliated with or endorsed by PENTAX.