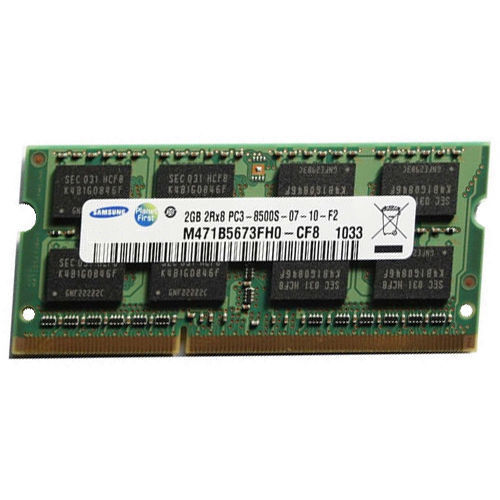 Your computer can go through an entire overhaul by integrating double data rated speeds with 2GB of RAM all in one memory slot. The PC2 8500 is also a dynamic model. This Memory Stick refreshes its capacitors as to clean your slate of data for live, ongoing performance.

What are the common bytes for computing RAM?

The typical number of RAM in a computer consists of 16, 32, and 64 megabytes, which are equal to 32 and 64 million bytes. These numbers offer a healthy range of computing power like the 2GB powered PC2-8500 chip. The PC2-8500 module measures as a memory with a frequency of 1066 MHz. The day-to-day use of any computer will access RAM and DDR2 for powering software and for uploading data accessed from the Web. The random access data system makes virtual memory possible with a link between the computer’s hard drive and RAM capacity. This feature occurs when its 2GB RAM is filled, and a secondary process occurs through the hard drive, but for temporary time frames.

There are a variety of RAM sources to consider as you fill in the memory slots you have on your computer. Each motherboard enables at minimum two separate memory modules to be put in place for DDR2 performance. This placement creates a circuit. The connection of each module will allow the computer to access a variety of processing levels, speeds, and frequencies. This dynamic integration enables the user to use the right RAM processing for the type of work each computer will accomplish. The modern computer only needs 8GB of random access to operate the software, and this can be accomplished with only four memory modules rated for DDR2 1066MHz.