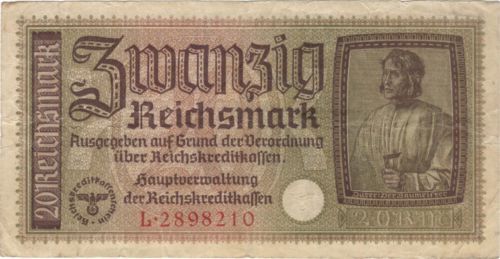 The German government does not issue currency anymore, and it hasnt since 2002 when the Euro became the currency for the European Union. However, the German currency dates back to 1754. Since 1754, up until 2002, there have been various changes made to their coins and paper money.

What are some types of German money?

Where was each type of German money circulated?

While some of the paper banknotes were circulated throughout the area that is now Germany, this paper money was circulated in a specific region of Germany or areas outside of its modern day borders:

What is military currency?

Military currency was used by Allied troops who took control of certain regions of Germany during World War II. This currency was created to control the economy of occupied areas of Germany during those turbulent economic times. The United States Bureau of Engraving and Printing would usually issue this form of paper money. However, they were often referred to as marks.

Notgeld were banknotes that were issued by organizations other than the central bank during the nations period of hyperinflation. However, they were frequently referred to as marks. Organizations that were used to issue emergency marks and other forms of currency included town governments. private firms, state-owned firms and town banks. The denominations of these banknotes were large. For instance, there is a 100 million mark banknote that still exists. These emergency banknotes often have scenes printed on them that tell a story.