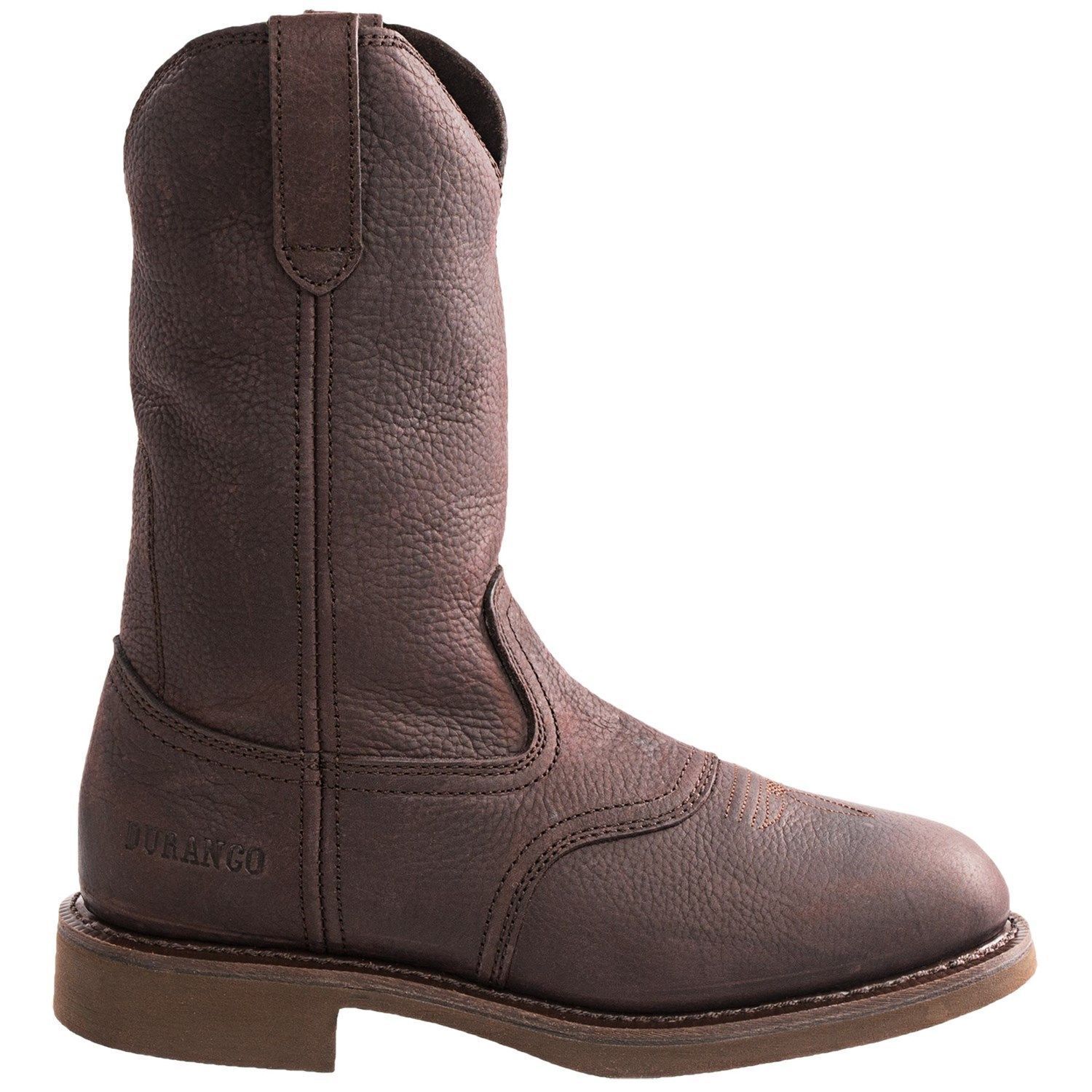 Durango offers a selection of different boots in a range of colors, styles, and features. Among the features of some of the boot offerings are waterproof protection and steel toes. Styles vary, with some boots featuring harnesses and pointed toes while other boots do not have harnesses and have a squared toe.

Are Durango Rebel Saddle Up boots made of leather?

Yes, Rebel Saddle Up boots by Durango have full-grain leather uppers. These boots have 12-inch shafts, 15-inch calf circumferences, and 1 3/8-inch heels. They also feature non-slip soles made of rubber and EVA. Durango Rebel Saddle Up boots also have a steel shank designed to provide arch support and insoles in place for the purpose of flexibility. This style of boot is made of leather. One offering of the boot is the DB4442 listing, and it features a dark brown footpiece with a light brown color going up the calf of the boot.

What is the shaft length of the Rebel waterproof boots?

The pull-on western boots offered by Durango have shaft lengths of approximately 11 inches. Depending on the size of the boot, the Rebels calf circumference falls somewhere between 15 and 16 inches. These boots have 1 1/2-inch rocker heels and square toes. A pair of size 10 Durango boots weighs 3.8 ounces.

Do boots have impact and compression ratings?

Yes, these rugged Durango work boots have been tested for and passed three impact and compression thresholds. First, the boots steel toe has an ASTM F2413 protection classification. Second, the boots meet ASTM F2413 electrical hazard requirements. Third, these Durango boots are made entirely without nails and have flexible rubber and EVA midsoles.

What colors and styles do Durango boots come in?

Durango makes boots in different colors including brown, tan, and black. In addition, Durango makes a version of a waterproof boot that features several themes including Old Glory and the Texas state flag. The Gambler Patriotic western boots feature a shaft displaying the American flag and full-grain leather construction. The Gambler Patriotic western boots also feature 1.5-inch walker heels. Some boots feature harnesses on them as well. For example, the Durango DB594 Brown Distressed Leather boots feature a harness around the ankle area of the foot. The boots come in dark brown in sizes ranging from 8-13 and in both medium and wide widths. Durango work boots have the same electrical hazard ratings, impact protection, and flexible midsoles regardless of exterior design.

Content provided for informational purposes only. eBay is not affiliated with or endorsed by Durango.