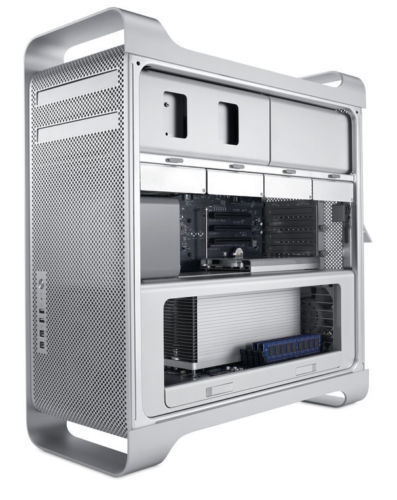 The Mac Pro is a series of workstations and servers produced by Apple since 2006. These high-end desktop computers can be connected directly to your business network and provide additional functionality for professional workers. Most models of the Mac Pro are equipped with an Intel Xeon quad-core processor.

What is the Intel Xeon processor?

The Xeon is a line of x86 processors aimed at businesses that use workstations and servers. The Xeon processors have a similar architecture as their desktop counterparts; however, they tend to emphasize different aspects such as more raw processing power.Xeon is equipped with the following features:

There are two generations of Mac Pro computers. The first generation was released between 2006 and 2012. Most of these original Mac Pro models come with the option of either one or two quad-core Intel Xeon processors. The first generation is equipped with multiple hard drives, five USB 2.0 ports, FireWire 400 and/or FireWire 800 ports, a SuperDrive optical drive, and several different expansion slots. Wi-Fi connectivity, Gigabit Ethernet ports, optional Bluetooth 2.0, and a 56k modem are all included as well. The second generation was released in 2013. It features a single four-core "Ivy Bridge" Xeon processor. In addition to most of the first generation features, the second generation adds USB 3.0, HDMI 1.4, and Thunderbolt 2 ports. The hard drive is replaced with a solid-state flash storage drive. The Mac Pro computers have different variants, so ostensibly the exact same model may feature six-core or eight-core processors instead of just four.

Which operating system does the Mac Pro run on?

The Mac Pro runs on various versions of the Mac OS X operating system, with the 10.13 "High Sierra" being produced in 2017. The Apple BIOS also allows you to boot up two or three operating systems at the same time, so in addition to Mac OS X, you can run Microsoft Windows XP, Vista, 7, and various Linux distributions.