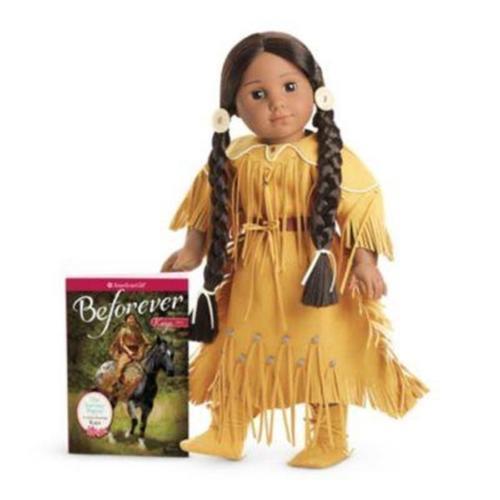 What collection does American Girl Kaya belong to?

Why doesnt Kaya have a toothed smile?

Many of the American Girl dolls are created with huge smiles showing a lot of teeth. The Kaya Native American doll has a small smile but doesnt bare any teeth. The reason she doesnt bare teeth is because she is a member of the Nimiipuu tribe. Historically, the Nimiipuu tribe felt it was taboo to bare teeth. In an effort to stay culturally accurate, the American Girl doll was created with a closed smile. Kaya also has black hair, dark eyes, and medium dark skin.

What American Girl accessories are available for Kaya?

Kaya is outfitted in a fringed and beaded dress authentic to her era. She is also wearing moccasins and has hair ties that can be adjusted. Her leather belt can also be taken off or adjusted. The doll has several additional accessories to choose from, including several outfits, horses, and a teepee. You can also purchase doll stands and covers to keep the doll in pristine condition. Some of the outfit changes available for this girl include the following:

How many American Girl books are in Kayas collection?

The American Girl Kaya doll comes with "Volume 1: The Journey Begins," which is the background story for her character. There are several other American Girl books featuring Kaya, which are listed here:

What year was the Kaya American Girl doll released?

The doll was released in 2002. She is the first Native American doll in the series. Her motto is to always respect the Earth. She often endures wild adventures and epic surprises. Her horse, Steps High, follows her on all her journeys and reminds her to walk the right path.

Content provided for informational purposes only. eBay is not affiliated with or endorsed by American Girl.